I do love a good cliffhanger. And I received it recently, reading Morning Glories TP collecting issues #1-6. Now, I’m about to compare it to Lost, the television series, but bear in mind that I have watched Lost twice in the last year in its entirety so it may just be on my mind.

It’s a story about these teenagers who begin attending a private school called Morning Glory Academy where they quickly find out they all have the same birthday. Weird huh? Kinda weird. It is insinuated that these teens may be special and/or have abilities. So it is reminiscent of X-Men in that sense. Except, the teachers seem to be out to test the students to their limits in a bad way.

The layout of the plot is what reminds me of Lost. The writer Nick Spencer introduces characters, then shows you their most recent past, moves forward with the story, inserts new characters, sometimes leaving you without a background then blows you away with big cliffhangers. I’m speaking very generally I realize and probably about a lot of stories, but it really feels very similar to Lost at the moment. Giving you tid bits here and there, like baiting a bunny with a hanging carrot, and blasting you with shocking endings and not necessarily picking up where you left off (Lost was pretty good about not doing this all the time).

Spencer’s ability to leave the audience hanging and wanting more works well because then people will keep buying his comics, just like when you get to a certain point in Lost, you have to keep going because you have to know more. I’m sort of on the morning glory boat in that I would like to know more but not have to yet. I may wait for TP #2 because they are easier to put on my bookshelf. As you can sort of see, my bookshelf is buckling: 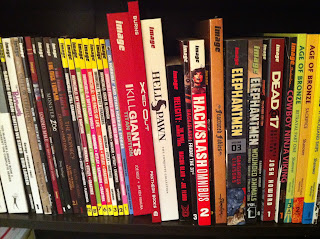 I am now wondering why the MGA is named after the morning glory flower. Apparently, morning glory is a common name for 1000+ species in a specific family and they usually flower in the morning, aptly named, but some are night blooming. So what does that have to do with the students or the academy? Are these kids going to bloom like flowers then shut at night?! I have no idea. Maybe I’ll look up some Nick Spencer interviews and see if he explains it because I would like to know.

Now somehow with the conversation that has been going on while I’m writing this post, between my partner Ross and friend Megan from Berkeley, Scarborough Fair was requested as I have the computer.  If you have heard this song by Simon and Garfunkel, or if you haven’t, the lyrics include these:

Tell her to reap it in a sickle of leather (War bellows, blazing in scarlet battalions).Parsley, sage, rosemary, and thyme (Generals order their soldiers to kill).And gather it all in a bunch of heather (And to fight for a cause they’ve long ago forgotten).Then she’ll be a true love of mine.


Since talking about plants and after reading Morning Glories where battles ensue between teachers and students, this song seemed kinda appropriate. And there is a scene in MG set in 1490 which makes me think these teachers may be fighting for a cause they’ve long forgotten. We’ll see I suppose in the next 1-6 issues.