There used to be a little place in Seattle’s University-district called, “Coffee and Comics” and I never went there. It was a mistake I now realize, but I just got a job at a coffee shop and I have comics either at home or in my bag at all times so it’s like it still exists, for me anyway.

In other job news, while meeting Scott Kowalchuk and Kurtis Wiebe of “The Intrepids,” I discovered that Kurtis needed an editor. I offered my services for a byline in his comic. And, lo and behold, look for my name in “The Intrepids” issues #3 and #4 at your local retailer soon. I will make an announcement when they come out! I am so excited and honored to be a part of their creation. My 8-year-old cousin, when offered 5 comics to read, asked for the one with the cyber-bear. So I told him it was special and to be careful with the pages, and he says, “I can see why it’s special.”

I finished reading “The Sandman: Preludes & Nocturnes” and I don’t know how I feel about it yet. I have read how popular it is, how women readers have particularly enjoyed it, but I am still figuring out if I like it especially since I feel a little pressured to like it because it is so admired. It’s about Dream, who is the Lord of dreams, and while reading it, all I could think about was if Gaiman wanted his character to look like him. Maybe I’m just behind a couple decades behind but check it out: 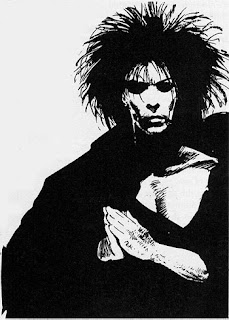 “Invincible: Family Matters” Vol. 1 was more than I was expecting. Granted it’s an Image book, so I should have expected great things, but in the words of Ross after he read it, “It’s self-aware, it knows it’s a superhero comic.” That’s what I like about it so far. I thoroughly enjoyed the bit about Mark’s costume. He requests an iconic costume from the local “nuclear powered suits of armor” business, and once he chose his alias “Invincible,” I thought they went well together. Volume 1 is Invincible’s origin story as far as I can tell, and you don’t get that in a lot of comics right off the bat.

Invicible’s father is Omni-Man who is an associate of the Guardians of the Globe, which I think is inspired by the Justice League. I just looked it up and I was right. It is pretty obvious but I just wanted to make sure! So Omni-Man provides his son with their heritage, explaining that he is an alien sworn to protect Earth. I am liking this back story, and especially liking his day job. Due to his superspeed, he writes and publishes books at the same rate! I am a little jealous.

I just finished “Invincible: Eight is Enough” Vol. 2 and man it threw me. I am now suspicious of a character that I was liking-this is an understatement as there was a mass murder followed by a splash page revealing this character bloodied and centered. I don’t want to spoil it for those that are interested so don’t wikipedia it, read it instead.

Next on the docket is “Morning Glories” TP collecting issues #1-6. I have read issues #1 and #2 but received the TP at comic con woohoo! The writer, Nick Spencer, while signing it made a mistake and he  left it on the ground as it was ruined. I found it in the mess of trash after we packed up the Image booth so I swiped it. It says on the inside cover, “To Soyjoy! Remember” and for all those granola types, Soyjoy is a fruit bar which was being handed out at comic con!

As for convention updates, Wizard World Toronto Comic Con is this weekend for all those close by. Wondercon is in San Francisco April 1-3. Shout out to Image folks, good luck and have fun! And I will be attending Heroes Convention in June followed by SDCC in July courtesy Image Comics!