Growing up near the Oregon coast, I visited often with my family. As a coast goer, you know that the weather is never predictable. As we are all seeing via the television and internet media, Japan and it’s people have been hit hard with the tsunami. My friends and I planned this trip to the coast long prior to the devastating event and checked the weather warnings carefully. With Japan in our hearts and minds, we ventured to the coast, humbled by the power of the ocean and taking moments of silence here and there.

It was dubbed by Ross as a “science trip.” If we weren’t discussing science, I don’t know what we were doing. Our first stop was Ridgefield, WA to stay with Lindsey’s parents, receive the warmest welcome with girl scout cookies and hugs and reunited with our friend Sara who looked lovely as ever. The next morning, we drove over the Fremont bridge in Portland and enjoyed the drive to Cannon Beach. We were met with some unanticipated, fairly good weather but we spoke too soon and were faced with wind and rain hurtling towards us as we battled to get close to Haystack Rock. There we saw a few orange starfish, sea anemones, barnacles and mussels (at least I think they were mussels).

We walked back along the road as the sand gave us a workout, and stopped in a house called Steidle’s Art. The house was essentially an art gallery with an older gentlemen situated in the left, front corner of the house as you walk in. He was most definitely Steidle, surrounded by easels and paintbrushes, secretly reading a book.  You can find some of his art that I experienced here. I have never been into an art gallery and felt so strongly that I wanted to buy something and display it in my house. I will definitely purchase a print in the near future. Before lunch we stopped at Bruce’s Candy shop and picked up loads of candy and watched taffy being wrapped with an old timey machine.

We ate at the Lumberyard Rotisserie and Grill then headed to Seaside where we stayed overnight. The sun graced us with its presence and we definitely needed the warm feelings that came with it. We walked to the ocean and enjoyed the sounds of the birds, dogs, people and waves. 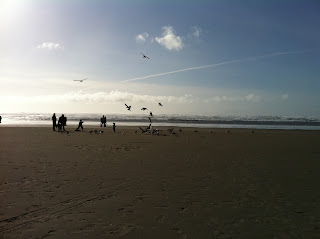 Lindsey and I proceeded to the Tilt-a-Whirl which was surprisingly invigorating and we didn’t get sick! I remember Lindsey yelling, “The g-forces!” We walked to their mall and as we approached the Rocky Mountain Candy Co. which was empty and closed, we ended up meeting the son-in-law of Bruce, of the candy shop. Apparently a Bruce’s Candy Shop will open in Seaside this April 1 or May 1. We enjoyed pizza for dinner and a bottle of Barefoot Cabernet Sauvignon, the magnum size. We did not finish it though as we fell asleep to dream of the sea.

Sunday rolled in with rain, rain and rain. We drove back to Cannon Beach for some Bella Espresso and Lazy Susan Cafe breakfast, where the service and food are a perfect match. We drove up to a lookout point off of Ecola State Park Road where we experienced wind that was stronger than anything we had ever felt. Ross predicted it was 70 mph which I have to agree with.

We headed to Astoria where we walked the town, climbed 165 steps to the top of the Astoria Column, visited the Goonies house, nearly got pooped on by seagulls aiming and drove across the Astoria-Megler Bridge ending up back in Washington. We drove along the 101 to Long Beach. We drove on the beach, because you can do that there! And promptly left to trek to Seattle.
We passed the Satsop nuclear plant that was abandoned after it was nearly 77% complete, which nearly concluded the science conversations of the trip. We stopped in Olympia for some dinner and experienced heavy rain and dark clouds to Seattle. The skies cleared as we emerged from the express lane tunnel for just a few minutes reminding us that the sky is always blue.
Advertisement